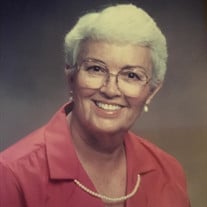 On March 16, 2018, Ann Shipp passed on from her home here in Napa. Born September 9, 1921 in Boothton, Alabama, Ann was the fourth of nine children. Raised in rural Alabama, Ann learned to shoot and fish from her father, who was the Washington County Sheriff and Game Warden, on separate occasions. Being raised in the midst of the Great Depression, she learned the values of hard work and thrift. In 1944 she married Jack Shipp, a radioman in the US Coast Guard. This began a 20 year tour that included stops in San Diego, Galveston, Texas, Mobile, Ala, Juneau, Alaska, and back to Mobile. During this tour, Ann gave birth to two sons, Herbert and David. With Jack out to sea for extended periods of time, Ann raised two boys and worked part time at various jobs to help support her family. In 1965, Jack was transferred to Sacramento and Ann had her third cross country move. Settling in Citrus Heights, she and Jack both went to work in Civil Service jobs at McClellan AFB. Upon her retirement in 1975, Ann and Jack took up camping and spent many wonderful trips exploring the Sierras and catching many trout. After Jack passed on, Ann moved to Napa to be near her grandchildren. Spending time with Kate and Andrew brought much joy into her life. These were times that she and her grandchildren cherished greatly. It was also during this time that Ann made many wonderful friends at the La Siesta Mobile Home Park. Ann was predeceased by her father and mother, Howard and Rhoda. Also, predeceasing her were brothers and sisters, Howard, Herbert, Tim, Rose, Rhoda, Mary, Betty, and Don. She is survived by two sons, Herbert (Jackie) and David (Mary) and two grandchildren, Kate and Andrew. Ann had a fulfilling 96 years, meeting many people and making many wonderful friends. The family would like to thank all her friends and the Napa Valley Senior Care Center, especially Teresa, Noel, Judith, and Evelyn, who played a big part in making her life rewarding. The family is also indebted to the Queen of the Valley Hospital and the wonderful staff at Collabria Hospice (Katie, Kaleigh, and Pat)

On March 16, 2018, Ann Shipp passed on from her home here in Napa. Born September 9, 1921 in Boothton, Alabama, Ann was the fourth of nine children. Raised in rural Alabama, Ann learned to shoot and fish from her father, who was the Washington... View Obituary & Service Information

The family of Ann Shipp created this Life Tributes page to make it easy to share your memories.

Send flowers to the Shipp family.