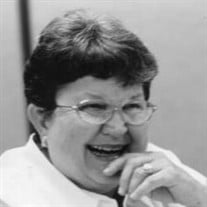 Ann Louise (Radcliffe) Bookmyer died in Napa on April 5, 2016, just shy of her 77th birthday. Born in Denver, Colorado April 17, 1939, she was the oldest child of Gene and Caroline (Woody) Radcliffe. The family made many moves throughout the years, as Gene searched for work. They lived in Denver, Colorado; Pueblo, Colorado; Salt Lake City; Bremerton, Washington; Vallejo, California; and Yuba City, California, finally becoming permanent residents of Vallejo. The family moved into Federal Terrace in 1944, when Ann started school as a kindergartner. She went through the Vallejo school system, where she graduated from Vallejo High School in 1957. Ann worked in the catalog department at Sears, located in downtown Vallejo. There she met a young man named Robert Bookmyer. Bob also worked at Sears in the warehouse and would bring the purchased products to the customer. Ann and Bob were married January 13, 1957, at the First Baptist Church on Sonoma Boulevard, by Reverend Stanley Cornils. Ann gave birth to a daughter, Sharon, in August of 1957. Sharon was soon joined by a sister, Susan, in 1960. The family moved to Santa Rosa where Bob worked as a loan officer for Seaboard Finance. When he got a job in Oakland at Pacific Finance in 1963, the family moved to Albany, California. Ann had to find a job very quickly, and was able to become a teller at Berkeley Savings and Loan. She packed up the household and moved the family in the weekend before starting work on Monday morning. In 1964 Ann and Bob bought the family house on Pierce Street in Albany. They had lived there for 25 years when Bob got a transfer to southern California. They bought a house in a new subdivision in the newly formed Chino Hills, sold the little house on Pierce Street, and moved south for work and adventure. They lived there until Bob’s sudden death in 1997. Ann moved back to the Bay Area the following year, buying a condo in Rohnert Park. She worked as a secretary for her old firm, Harding Lawson Associates in Novato, for several years before retiring. When the stairs in the condo got to be too much, Ann moved into Sharon’s house in Napa. Diagnosed with advanced lung cancer in January, Ann kept her sense of humor as long as she could, finally succumbing on April 5th. Ann is survived by her daughters, Sharon Marangoni and Susan Bookmyer, brother Robert Radcliffe and sister-in-law Bonnie Scott, nieces Lori Willyard and Alison Means, great nephews Noah and Seth Willyard, great niece Eden Willyard, and great nephew Christopher Means, along with many cousins and friends. A friends and family get-together is planned at Applebees Grill and Bar Restaurant in Napa on April 19th at 2:30 PM. For those who wish, donations may be made in Ann’s name to the organization of your choice.

Ann Louise (Radcliffe) Bookmyer died in Napa on April 5, 2016, just shy of her 77th birthday. Born in Denver, Colorado April 17, 1939, she was the oldest child of Gene and Caroline (Woody) Radcliffe. The family made many moves throughout the... View Obituary & Service Information

The family of Ann Louise Bookmyer created this Life Tributes page to make it easy to share your memories.

Send flowers to the Bookmyer family.