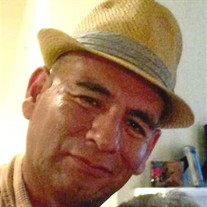 Anibal Parrado passed away March 10, 2017, from injuries received in an industrial work accident. As a husband, father, brother and son, Anibal leaves a behind a legacy of love and compassion, and a commitment to do good in the world. Those of us who adored him feel blessed with having been a part of his life. Anibal was a renaissance man, a seeker of knowledge and truth and goodness, and someone who thought deeply about the world. With a philosopher’s consideration towards the issues of the day, he had a preference for getting to the heart of the matter instead of engaging in small talk, and truly enjoyed exploring new ideas with his friends and family. Born in Oruro, Bolivia in 1966, Anibal was the youngest of five children. With no TV, tiny Anibal enjoyed spending time with his siblings in the kitchen, where his mother would tell stories and sing songs. This was the start to Anibal’s life-long love of storytelling, cooking and music. Later, as a student at the University, Anibal’s eyes were opened to the difficult political and economic challenges in Bolivia. He also became passionate about traditional Bolivian music and that became his forum for expressing his politics and support for the indigenous people of his country. His band name was named Sartañani, meaning “we will rise above from the strength of those who came before us.” They played widely throughout Bolivia, Europe and ultimately the United States where he found his way to Long Beach, CA, and met his wife, Virginia Rangel. Anibal enrolled in the local college and earned an Airplane Mechanic’s degree and 12 different licenses required for a “Master Mechanic” distinction. With the birth of their daughter, Isabel, the couple relocated to Napa and Anibal began work for AT&T while also making time to play musical gigs around the Bay Area. Anibal was an active part of the Stone Bridge School community for ten years while his daughter attended, serving on the Parent Council and volunteering whenever a need arose. Anibal also worked with the Napa Valley Swim Team as a parent volunteer, as the NVST Vice President and also as a certified officiate for The USA Swim association in many high and low level swim competitions. Leaving AT&T, Anibal worked at the Military Ocean Terminal Concord, as one of 5 Master Mechanics on this large base. He was a person who lead a beautiful life where he loved those closest to him, and enjoyed his work tremendously. Anibal is survived by his wife Virginia, his daughter Isabel, and his brothers Fernando and Nelson, and sisters Maria and Nilda, all in Bolivia. According to Anibal’s wishes, no funeral services will be held. A potluck memorial celebration of life will be held on Saturday, March 25, at the Parrado home, 1691 Carol Dr. In lieu of flowers, donations may be made to the Anibal Parrado Family Fund (https://www.gofundme.com/anibal-parrado-family-fund).

Anibal Parrado passed away March 10, 2017, from injuries received in an industrial work accident. As a husband, father, brother and son, Anibal leaves a behind a legacy of love and compassion, and a commitment to do good in the world. Those... View Obituary & Service Information

The family of Anibal Cesar Parrado created this Life Tributes page to make it easy to share your memories.

Send flowers to the Parrado family.