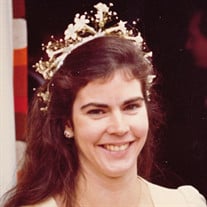 Angela Collins St. John died June 13, 2017 in Napa, California, of complications from Alzheimer's disease. She was a resident of St. Helena in the late 1980s where she was an active volunteer in local schools. She returned in 2010, and loved spending time gardening and walking her dog, Mosie. During the 1970s, she resided in Washington DC where, she opened "Angie's New Leaf," a plant-flower-card-gift-neighborhood anchor on 17th Street NW which flourished during a transformational period in the city. Angie’s New Leaf was a popular shop for locals to visit and re-visit, and she is still remembered fondly by many of her customers. Angie and her sister, Mary Margaret, ran Angie’s New Leaf for more than a quarter century. In February 1981, Angie married Edward P. St. John, a native of Napa California. They spent their first year a marriage in Armidale, Australia, where her new husband was a visiting fellow at the University of New England and Angie made many friends. When they left the small rural community to return to DC with their newborn son, Denis Wesley, more than 30 residents came to the airport to say goodbye. After their return, Angie gave birth to her second son, Liam Edward, who was born at Sibley Hospital, where both Angie and her mother had been born. Angela and Edward moved to the Napa Valley in 1985 so their young children could be closer to their grandparents, Wesley Victor and Gladys Loretta St. John. They spent an extended period away from St. Helena, living in New Orleans (LA), Dayton (OH), Bloomington (IN), and Ann Arbor (MI), as Edward pursued his academic career. Angie volunteered in schools and libraries, gardened, and hosted many large and memorable dinner parties In 1995-96, as part of a sabbatical, the family took a nine-month trip around the United States, as they “home schooled” their boys. Denis’s project was study of earth science focusing on national parks and Liam’s examined how state communicated about their histories in capitol tours. Angie took photos and edited their volumes. For many years Angie also edited Edward’s publications, contributing to his rise to an endowed professorship at the University of Michigan. They were an academic family harking back to the traditional spirit, making their way together as a unit, not just as individuals. Angie was born February 24, 1947 in Washington DC, attended Nativity grade school and Notre Dame High School in Washington, and received her Bachelor’s Degree from the University of Dayton, OH. She was the second daughter of Denis and Mary Hannan Collins. She is survived her husband and sons, along with her daughter Denise Lynn Bradley, her husband Peter John and their children Alana Elizabeth and Connor James. She will also be sorely missed by her siblings and their many children: her sister Mary Margaret Nickolaus and husband Paul, brothers Denis Collins and wife Pamela Riley, Kevin Collins and wife Kristen Sparrow, Joe Collins and partner Susie Monick, and Brendan Collins and wife Dawn Collins. Visitation will be at Claffey and Rota Funeral Home (1975 Main St., Napa), June 24, from 1-4 p.m. Angie’s family will make contributions in her name to her favorite charities: Global Harmony Through Personal Excellence (3925 Livingston Street, NW, Washington, DC 20015-292) and the Institute for Advanced Catholic Studies (USC, 6301 Watt Way, GFS 203, Los Angeles, CA 90089-1693).

Angela Collins St. John died June 13, 2017 in Napa, California, of complications from Alzheimer's disease. She was a resident of St. Helena in the late 1980s where she was an active volunteer in local schools. She returned in 2010, and loved... View Obituary & Service Information

The family of Angela Collins St. John created this Life Tributes page to make it easy to share your memories.