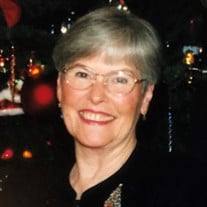 Died peacefully in her home, surrounded by her children, in Napa on December 20, 2018. Amanda Virginia Cecil was born August 27, 1931, in Leonardtown MD, the fourth of seven children to William Franklin Cecil and Elizabeth Stuart Duke Cecil. She grew up in Baltimore MD, graduating from Notre Dame High School, before working for the FBI and then as a flight attendant for American Airlines. Amanda met the love of her life, Peter Alan Hawkins, in San Francisco in 1956, and they wed in the summer of 1957. Amanda was a devoted wife and mother, giving herself fully to making a beautiful and loving home for her family, initially in Walnut Creek and later Napa, Tarzana CA, Coto de Caza CA, Columbus GA, before finally re-settling in Napa in 1998. She remained very close to her brothers and sisters despite living 3000 miles away and seeing them only once or twice a year. She was an avid bridge player and active Kiwi club member (retired American Airlines stewardesses) in her younger years, and more recently a devoted parishioner at St. Apollinaris Catholic Church in Napa, where she was a member of the Women’s Guild and sang in the choir as well as with the Napa Valley Chorale. She was also a dedicated volunteer for Birthright of Napa, handing out roses every Mother’s Day for several years. Predeceased by her husband of 46 years, Peter, her mother and father, brothers Bill and Tom Cecil, and brother-in-law Joe Hawkins; Amanda is survived by her loving children Joe and Michelle Hawkins, Jane and John Shoemaker, Amanda and Stuart Arnott, Peter and Ame Hawkins, and Bill and Kathy Hawkins; grandchildren Katie, Bill, Emily, Dan, Lauren, Anna, Mariel, Grace and Nora Jane; her sisters Betty Nell Wagner, Madge Seoane, Ann and Jim Adamski, and Tisa and Bob Deforge; brothers/sisters-in-law Bob and Jerady Hawkins, Mary and Tom Hayes, and Gail Hawkins; and nieces, nephews and dear friends too numerous to mention. The family would like to give special thanks to long-time caregivers Mary Elliot and Jenna Walsh and Collabria Care Hospice Services. A rosary will be held Thursday, January 10, at 7pm at Claffey & Rota Funeral Home in Napa. A Funeral Mass will follow Friday, January 11, at 11am at St. Apollinaris Catholic Church. In lieu of flowers, donations may be made to Alzheimer’s Association, Birthright of Napa, or Collabria Care.

Died peacefully in her home, surrounded by her children, in Napa on December 20, 2018. Amanda Virginia Cecil was born August 27, 1931, in Leonardtown MD, the fourth of seven children to William Franklin Cecil and Elizabeth Stuart Duke Cecil.... View Obituary & Service Information

The family of Amanda Cecil Hawkins created this Life Tributes page to make it easy to share your memories.

Died peacefully in her home, surrounded by her children, in Napa...

Send flowers to the Hawkins family.