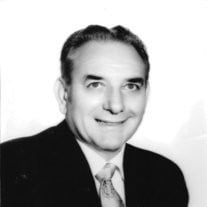 Aldo Paul Guidotti died peacefully in Napa on Tuesday, October 8th, 2013. At 93 years young, Aldo was still driving several days a week from his home in Napa to work at his Orinda law office. Actively practicing law for 69 years, Aldo lived his passion. He was a brilliant lawyer with down-to-earth roots who guided his clients through complex legal issues with trust, ease, and understanding. Born of Italian immigrants, Giuseppe Guidotti and Pierina Bardelli, on a small farm in Orland, California on March 29, 1920, Aldo was the first of his family to attend college. He received his B.A. in political science from U.C. Berkeley in 1941 and his J.D. from Boalt Hall in 1944, serving as Associate Editor on the California Law Review. Following law school, Aldo worked in Sacramento for State Senator Jack Shelley (later Mayor of San Francisco) drafting the California Unemployment Disability Insurance law. Aldo started practice in Oakland’s Temescal district in 1946, later adding partner Raymond Mellana to form the firm of Guidotti and Mellana. As president of the North Oakland Area Council, Aldo helped the City of Oakland acquire the site of the North Oakland Recreation Center and Temescal Pool. He was also active in the North Oakland Optimist Club, Temescal Merchants Association, and Colombo Club. Aldo’s legal secretary, Bernadine Bushman, became his wife in 1950, and in 1953 they gave birth to their only child, Joanna. Aldo moved his family to Orinda in 1958, where he contributed many hours over several decades to serving his Orinda community. He served as president of the Orinda Chamber of Commerce, was elected to the first City Council where he served from 1985 until 1996, and became Mayor of Orinda in 1989 and 1994. After Mellana retired, Aldo and attorney Charles Lee formed Guidotti and Lee and moved their law practice to Orinda in 1989. Aldo leaves his wife of 63 years, Bernadine Guidotti, daughter Joanna Guidotti, son-in-law Brian Jensen, and two grandsons Adam and Erik Jensen, along with several nieces and nephews. In 2007, Aldo and Bernadine moved to Napa to live with his daughter and her family. Over the past six years, Aldo watched his grandsons transform from boys into young men, debated the state of the nation with Brian and Joanna, and tended his acre of vines to create cabernet from Aldo’s Vineyard. This special time with Aldo, Dad, and Grandpa has forever enriched all of their lives. Aldo will be deeply missed by his family and endless friends and colleagues. A celebration of his life will be held on Sunday, October 27th, at the Orinda Country Club from 1 until 5 p.m. In lieu of flowers, Aldo would have requested that donations be made to the U.C. Berkeley School of Law, Boalt Hall, c/o Fran Davis, 2850 Telegraph Avenue, Berkeley, CA 94705.

The family of Aldo Paul Guidotti created this Life Tributes page to make it easy to share your memories.

Send flowers to the Guidotti family.