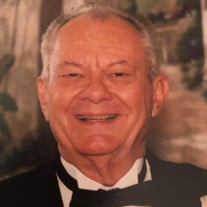 Albert (Al) Louis Nuccion, passed away peacefully on Feb 14, 2019 at the age of 83. Truly a fighter until the end, he will forever be remembered by his loving wife of 50 years Joyce (nee Ruggeri), son Stephen (Diana), daughter Stacey (Rich Mossholder), and grandchildren Robert, Christina, Amanda and Amber. He is preceded in death by his sister Nadine Zeller. Born to Pete and Germaine (Jimmy) in Butte, Montana on April 25, 1935, Al moved to Napa shortly after his birth. As head of the household from age 14 when his Dad passed, Al always took care of the family with several odd jobs - from picking prunes to slinging bales of hay to driving a tractor. Many of these jobs his family was still learning about until the end. After graduating from Napa High, he enlisted in the Navy during the Korean War. He served on the USS Bashaw as a submariner. Upon his return, he found banking as his career and his soul mate in his wife Joyce, without whose dedication and devotion, he would not have survived as long as he did. She was certainly his nurse and his muse “forever and a day” as they always said to one another. He was a lifelong Rotarian, served on the Grand Jury, was Commander of Woodbadge, and in general a very civil minded man. He loved to work with his hands - building a garage in the backyard, birdhouses with his kids or tinkering on his beloved MGTD. Al’s children recall the never ending support he offered - from sporting events to homework help and later in life with career choices and family growth. His grandchildren recall the “pancake man” and the obvious choice as silliest member of the family. Most certainly, his “little hamburgers” will miss him dearly. His cheery demeanor, easy smile, positive outlook, sarcastic sense of humor and endless love will be missed by all those who knew him. Services will be held at St. Apollinaris Catholic Church in Napa at 11am Friday Feb 22, 2019. Private burial to follow in San Rafael. In lieu of flowers, the family requests donations be made to the charity of your choice.

Albert (Al) Louis Nuccion, passed away peacefully on Feb 14, 2019 at the age of 83. Truly a fighter until the end, he will forever be remembered by his loving wife of 50 years Joyce (nee Ruggeri), son Stephen (Diana), daughter Stacey (Rich Mossholder),... View Obituary & Service Information

The family of Albert Louis Nuccion created this Life Tributes page to make it easy to share your memories.

Send flowers to the Nuccion family.