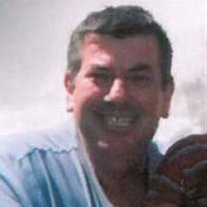 “Rom” Albert James, 59 of Napa, CA went home peacefully to Heaven on January 1, 2014. Born September 24, 1954 in San Diego, CA, Rom was the youngest of three children (Rhyse/Cheri) born to Naomi Ann James. As a young child Rom’s mother, WWII Marine vet and very strong, moved the family to Campbell, CA to live with her family in 1957. He lived with extended family on a small plot of land with two houses and a barn. His grandfather owned the Campbell Yellow Cab franchise. He would run free from house to house behind a fenced yard, between what to him must have been a huge place. When Rom was 7, the family moved to Napa where he attended Shearer Elementary, the old Lincoln School--for a short time—Ridgeview, and graduated from St. Helena High School. When his mother was still alive, he helped with her Indian activities-the Suscol Intertribal Council, the Longest Walk, and visiting DQU. He was very proud of his Indian Welsh heritage. Rom’s greatest joy was taking his family and nephews to Yosemite and A’s baseball and Raider football games. He would say he needed to start them young to make them fans. Any wife/girlfriend would also get invited from time to time. He took the family camping every year to Yosemite. He also very much enjoyed trains and would take family and friends to the Napa Valley Model Railroad at the Napa Expo. Taking nephews to Reno, NV by train for their 21st birthdays was also something he enjoyed doing. Rom was a generous, soft spoken gentleman who always had a smile on his face. He would always help emotionally and financially at any time his family or friends needed it. His generous heart was as big as he was. Rom held a long time (22 year) position at Raymond’s Vineyard in St. Helena as a cellar worker. He enjoyed working for the Raymond’s and looked forward to their annual Christmas party at Meadowood Resort. After retirement, he continued his old ways on a smaller scale collecting old TV shows like Gunsmoke, Combat, and Mork and Mindy. He loved the old ones. His favorite all time music was Bluegrass and wanted to take his youngest grand nephew to the Strawberry Bluegrass Music Festival one day. The family will make this happen now in Rom’s honor. Rom lived with his oldest Nephew and family at the Ahmann Ranch. He enjoyed going back and forth on the contiguous properties to his niece-in-laws and his extended family visiting and helping take care of their homes and animals when needed. He always liked to keep busy. He was teaching his great nephew Troy about sports and how to hit the baseball and all about trains. Lately, Rom was thrilled with the family of Border Collies that joined the family a few years ago. He taught them to fetch the ball and would spend his days with their offspring. He was training them as they grew to be adults. He is survived by his sister Mary Rhys Peck, nephews: Troy Reed, wife Anna, their son Troy Jr, daughter Leah, grand niece Makayla; John Peck, daughter Hanna, son Christian; Simon Peck, son David; Andrew Peck. Uncle Bud and Aunt Mary of NM, Uncle Tom and Aunt Naomi & family of CA and OR, Uncle Bill and Aunt Earlene & family of IA. A memorial for friends and family will be held at the First Presbyterian Church in Napa on 3rd street, Saturday, January 18th, at 2 pm. The family requests donations in his honor be made to the Napa Valley Model Railroad www.nvmrc.org.

The family of Albert "Rom" James created this Life Tributes page to make it easy to share your memories.

Send flowers to the James family.